Paddy Pallin 6hr in the Honeysuckle Creek area on March 10, set by Phil Creaser. An excellent course in lovely country that is now destroyed by fire.

I had made a promise to do some setting for the 2002 event after a most enjoyable 2001 event at Stromlo. When Adrian sent me an email in November to remind me of my promise and suggested Honeysuckle Creek, I leapt at the chance. I have orienteered, rogained, set orienteering courses and walked around the area since 1984 and while there are still some areas I haven’t visited, I do know the nice bits and the ‘Big Mothers’ – huge granite boulders – some in the middle of nowhere (eg controls 80 and 44).

Honeysuckle is one of my favourite areas and I also knew that the ACT Orienteering Association had about an additional 15 - 20 sq km of photogrammetry done by Chris Wilmott from low level photographs which I knew to be reliable (Apologies to the non technically minded). What it meant was that with the ssistance of digital map supremo, Bob Allison, we should be able to produce a special map of Honeysuckle Creek using the existing orienteering map supplemented by an area which should be able to show the contour detail and which could also include a it of fieldwork. My plan then, and still is now, as to keep adding more detail to the map and hile it would probably never be to an orienteering standard, at least it would be reliable for contours, show the 'green' areas and mark the big boulder areas.

I contacted my ‘rogaining partner’ Anna Booth to see if she was interested in doing some course setting and she very kindly agreed. One of the great advantages of working from a high quality orienteering map is that you can plan the courses fairly well in advance knowing the feature will be there and the map is accurate. As Anna can attest to, I get pretty frustrated when the 1:25,000 topo maps are so bad that you just cannot interpret what is on the ground from what is on the map and I say that as a person who can read topo maps and interpret what is or more importantly what isn’t on the maps. It takes a while to really get a feel for topo maps. Anyway, I digress.

Anna and I enjoyed the course setting and the walks around Honeysuckle (We only saw one snake I’m happy to say!) and while it wasn’t easy working from the black and white photogrammetry, it was still a real joy as it was reliable. It was a matter of interpreting what could be seen from the air to what was on the ground.

The best example I could give was around control 53 where the photogrammetry indicated 2 large boulders (maybe 4 or 5 metres or more) and 2 ‘small’ boulders (maybe 2 or 3 boulders) and that is exactly what there was there. Which does remind me to apologise for the fence line near 53. It isn’t straight as I should have remembered from the topo map. We crossed the fence twice and I (wrongly) assumed it went straight. So I will fix this up as well as add on further bits for the second edition. With a bit more time for this edition, it will give me a chance to get things right. Having a digital map of the whole area should make the task of further amendments etc fairly easy to do. I hadn’t been involved with any digital map before so seeing what could be done by Bob Allison was a real eye opener. While the scanning of the contours took longer than he originally estimated, it is still the best way to do maps if we want to have good maps that accurately reflect what is on the ground.

Anna and I were pleased with the positive The ACT Rogaining Association is grateful for feedback from a broad range of participants. We were particularly delighted with a number of groups who would probably admit to not being super competitive who had a great time and got back early as they had done all the controls they thought they would be able to do. They were a few comments about the green scunge in a few places that wasn’t mapped (true) and some of the boulders that weren’t on (again true) but overall it was positive. While most teams were pleased with their performances, a few came to grief in some of the trickier and less well mapped areas of the map. Which makes us fairly much in awe of the efforts of Graham Turner and Pam James who only missed 5 controls. A fantastic effort!

I know I am biased but I really do think that Honeysuckle it close to a perfect area for a 6 hour Rogaine. Some easy controls, some really difficult and all set in wonderful boulder country less than an hour from Canberra with not too much thick scrub. Who could ask for more! We can please all of the people all of the time! We were blessed with a great day for the event and with the approval of the National parks people, fine catering from Aranda Scouts and assistance from a number of people, it all seemed to go very well. I am sometimes reluctant to mention individuals as one invariably forgets somebody but I would certainly like to thank Anna for all her help and advice, Adrian and Geoff for advice and teeing things up, David and Judy for helping to organise, working in the tent, having a run and then doing 101 things afterwards, Ann and John Sutton for helping then running and winning their class, John Brown for working all day on the computer, Glenn Bridgart and Ian Booth for all their help, Brian Evans and family and friends for picking up controls and last but not least Norm Johnston who worked all day and then made three trips out to pick up controls. Thank you Norm.

See you at Honeysuckle again some time soon!

PP6 Story #1
On Saturday last week I went rogaining in the 2002 Paddy Pallin rogaine. We drove to Honeysuckle creek from Canberra in the morning and then went to the admin tent to get our maps. We then walked down to the carpark and planned our route, I was with Mum and Dane so we did a short, easy route.

The briefing started so Mum and Dane went to listen I had to get the control card. When the briefing finished I grabbed the control card and ran to mum and Dane we started walking down the road and continued for a while the Mum decided we should turn off the road there to get the control, we got it almost perfectly. We went around our first loop without any problems and got back to the Hash House after about 2 hours then we went around our next loop, we had lunch on a rock somewhere. We had almost no trouble till we went to control 55 anyway we basically had to contour around to it, but we didn’t stay on the contour properly and we missed the control and had to try again but we found it without too much trouble. We then finished up in about 4 hours and got 730 points.

We then played around on the rocks with some scouts who were cooking afternoon tea for us. Unfortunately they had to go and help cook so we just hung around until they started serving people. Dad was going with Murray the new deputy at Monaro High and we were waiting for them to finish, they were late by about 45 minutes and so got no score.

We then, after we saw the presentation, drove Murray to his house at Bredbo and back home.
Rhys Evans:

After an hours drive, from Cooma we arrive at Honeysuckle Creek and get directed by the friendly ACTRA people to go down to the parking area. We go and register, hand in our control card and collect maps. Go to the car and collect the trophies we made for the event and take them up to the hash house where they are greatly admired and then down to the car to plan a course we chose a north loop that went to32, 35,43,52,54,42,90,and 39 and a south loop that went to 22,71,60,30,91,38,55,and 26 with a couple of extensions, we planned it out on the map and the intentions sheet.

We handed in the intentions and got ready. When we started, we headed to the first control 32 we got there stamped it and headed out again to 35 and continued around the loop with out incident until 52-54 where we met dad and his partner and they told us how they had dropped the control card at the creek on the way to 90 and had to go back before they could punch it.

We then headed out on the southern loop and had lunch near 30 and headed out with a bearing to 91 (which was further up the creek than marked) we headed back gathering all our extensions, we got back with two hours to go and found that we had worked ourselves into a hole in which to get any point we had to go a long way so we stayed and mucked around in the rocks. We went and got food as soon as it was ready and had a lot (one of the great things about rogaines).

When the bell rang to say that time was up Dad was still not back. It actually took him more than another 30 minutes to get back so he lost all his points. We actually got more points than a lot of people who stayed out longer. 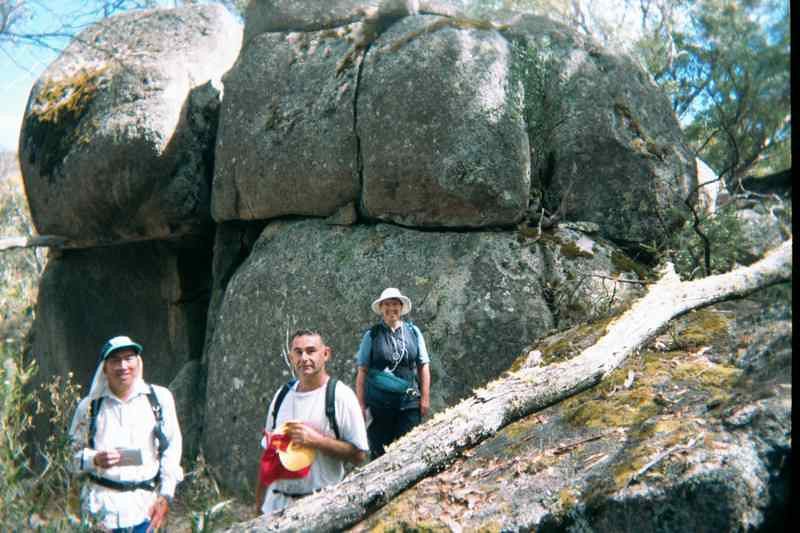